For Implementing Innovation, The key is "Raising Empathy".

Game Changer Catapult is a project launched in the spring of 2016 by Panasonic Appliances Company, with the objective of new business creation in new areas. Without being constrained by existing hardware development and sales processes, the project aims to foster and actually commercialize ideas for potential services that can be continuously provided to customers.

This time, we invited i.lab, Inc. managing director Yukinobu Yokota as the interviewer, and Game Changer Catapult representative Masanori Fukata as the interviewee. Fukata looked back at the background of establishing Game Changer Catapult and the process for creating team ideas, and had a discussion with Yokota - an expert on innovation projects and innovation education - about "the path of innovation in major companies in the future". 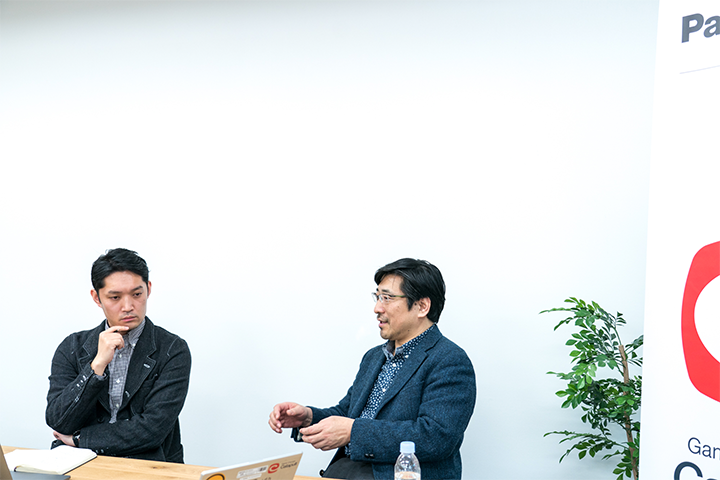 Tackling the "Service Industry", Rather than "Manufacturing Industry"

Yokota： First, please tell me about the background of launching Game Changer Catapult. What kind of problems were recognized behind the project's establishment?

Fukata： Panasonic turns 100 years old this year, thanks to everyone's support. Meanwhile, we have a sense of crisis that "we have to change". In order to survive this tumultuous time with diversified values and technology innovation, companies must change and adapt to a changing society. Since such problems were recognized, Game Changer Catapult was established as an activity to "materialize future kaden (meaning home electronics in Japanese)".

Yokota： What is the intention of using "kaden" in katakana characters, instead of Chinese characters?

Fukata： What Game Changer Catapult is trying to create is not mere "home electronics" as conventional hardware. Rather, we are pursuing a new concept of integrating products and overall services, including accessory platforms and communities. The idea is not like that in the "manufacturing industry". It is more like that of a "service industry" that provides new services along with products. That is why we distinguish it from "home electronics" and use "kaden". 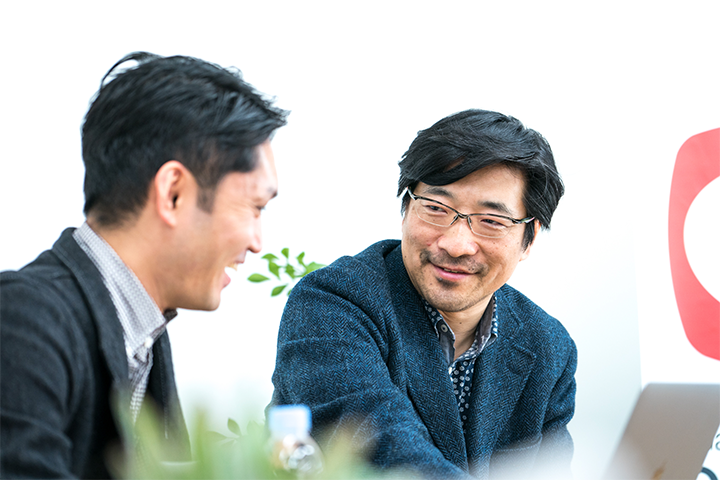 Fukata： Actually, that was not originally intended. Most of the projects selected by the Game Changer Catapult in-house business contest were conceived from inconveniences and ordinary troubles found in an individual worker's everyday life. These in turn led to ideas that possibly contribute to solving broader social problems and facilitating social changes. When we participated in the SXSW exhibition last year, many people highly regarded the concepts of our projects that consider a "solution for ordinary problems".

Product planning at major companies tends to premise "mass production and mass consumption", and to basically target standard people, i.e., the "masses". Meanwhile, products for solving specific problems have a limited target, and therefore can be to not be "accepted by the masses". Major companies tend to conclude that "the product scale is not suitable for their company", yet desperate needs exist.
However, the conclusion of a "poor selling product" is only judged within their visible range. If it is expanded to a global scale, there are some scenarios with a good size market.

When one opens up a process (even if it is a prototype), and widely presents the question: "what do you think of a product based on this idea?", cooperators may begin to gather, saying, "I'd like to make it together," or, "my research might be useful." If there are many expectant voices, they will be materials for persuasion on a course of commercialization. In order to claim that a major company's pursuit of commercialization of needs from a limited target is worthwhile, we believe that such an open-innovative method is important. Game Changer Catapult is still in a trial-and-error phase to find a way for new business creation. But we are not directed toward mass production and mass consumption. I believe that this is one of the Game Changer Catapult directions. 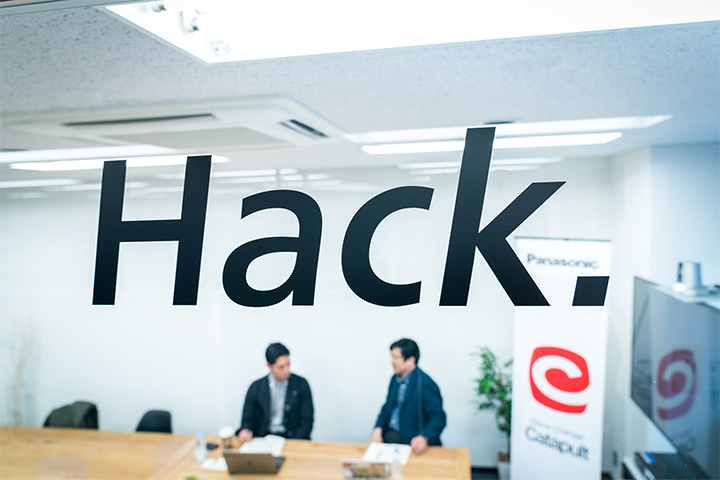 "Unlearn" and "Hack" are posted at the Game Changer Catapult office as important key words.

Yokota： What I particularly feel are possibilities in Fukata's talk so far is that Game Changer Catapult is focusing on "how to create new value by utilizing major companies' resources".

I think that one of the strengths of Japanese manufacturers is their prompt examination ability for seeking ways of mass production of highly uncertain, complicated devices within the existing assets. Furthermore, major companies have technological strength, brand strength, and broad distribution networks to realize it.

As Fukata mentioned earlier, possibilities of partnership with external cooperators are coming into sight in Game Changer Catapult, via interaction in the SXSW. I think this type of acceleration of "0 to 1" through connection with outside world will become one of the standard tactics of innovation in major companies in the future.

Fukata： I think Game Changer Catapult is a launch pad of ideas for "0 to 1" that involves external participants. In fact, in-house business divisions have the know-how for scaling up from "100 to 10,000". For major companies that tackle new businesses in the future, I believe that their task will be how to materialize commercialization based on new ideas.

Yokota： "Empathy" is a keyword to mature such innovations. Communication approaches with customers will be essential, in order to find value in unknown experiences and to be paid money for them. An effective approach for this is "sharing backstories". Members in Game Changer Catapult seem to be doing this naturally.

When disclosing the product context, such as "we work hard in making this type of product through this process, in order to solve this social problem", empathy rises among people. They may say, "we want to see it realized!". Value beyond this is unprecedented and therefore the monetary value is unknown. Yet, if the masses feel "support for the effort they are making", it will be an appealing power that can be reached by the masses. 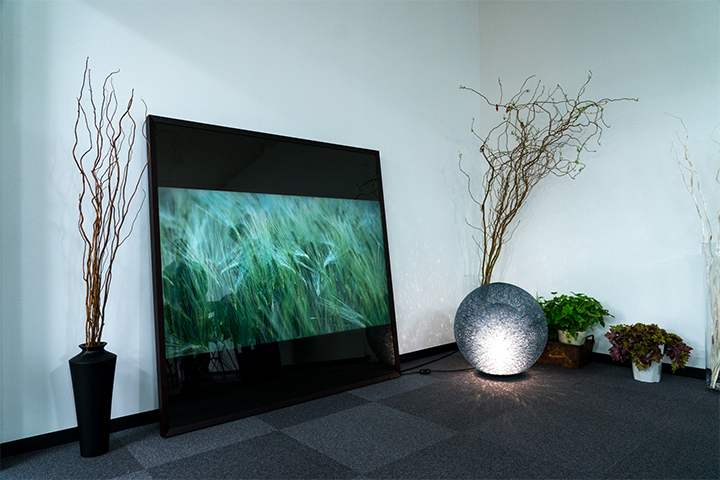 AMP exhibited in the SXSW 2017. Mainly with the former members of the home entertainment related business division, Game Changer Catapult proposed a new experience of "feeling" the video/sound contents as housing space value.

Yokota： It's a good experience.

Fukata： I hope the members will acquire the skills for such an adjustment, including ways of talking and usual behavior to receive cooperation and empathy from others. After two years of working for Game Changer Catapult, I myself feel that what matters when "doing something for society" is not the act itself, but the person who engages in the act. The person must raise other people's empathy to some extent. Activities for "society" are conducted while winning understanding from the closest people and society (workplace), and friends.

Yokota： The skill for gaining people's empathy is indeed a required quality for people who will play a central role in future organizations. People learn a new way of thinking and creating from interactions with people outside the company through open innovations. I think people - who accumulate experience and empathy inside and outside the company - will become a centripetal force for organizing diversified employees, as well as the bearers of a future major company. 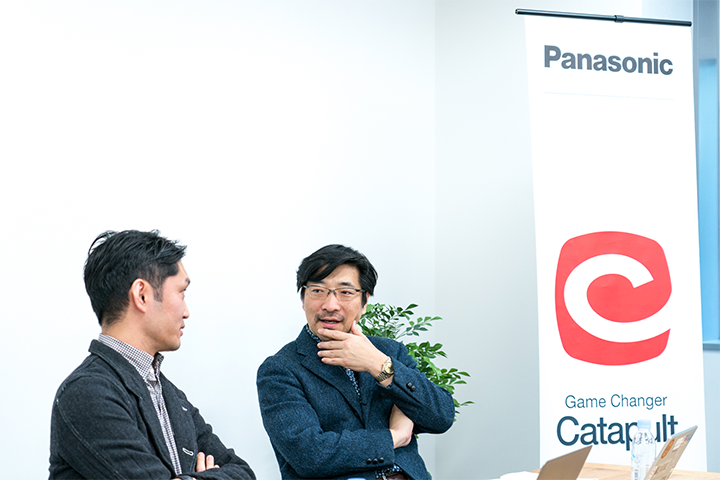 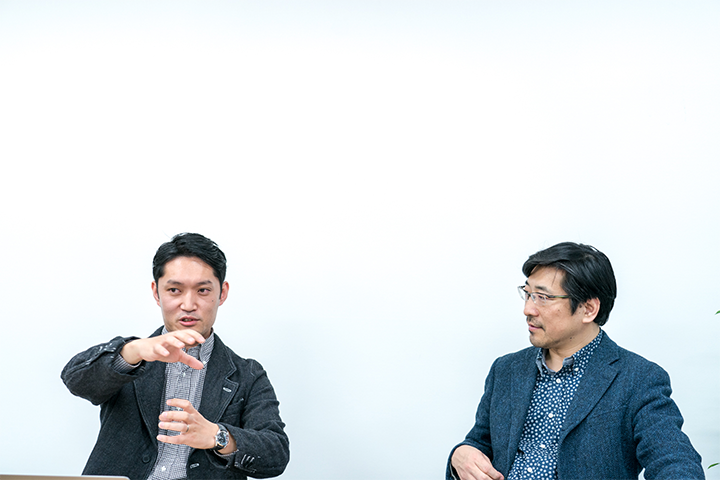 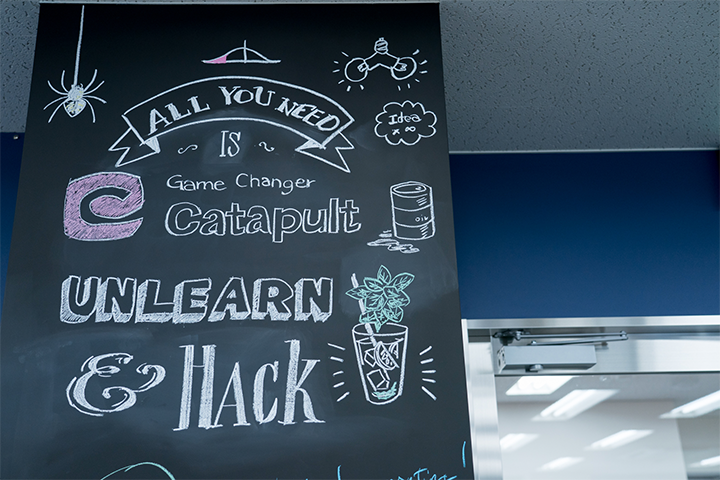 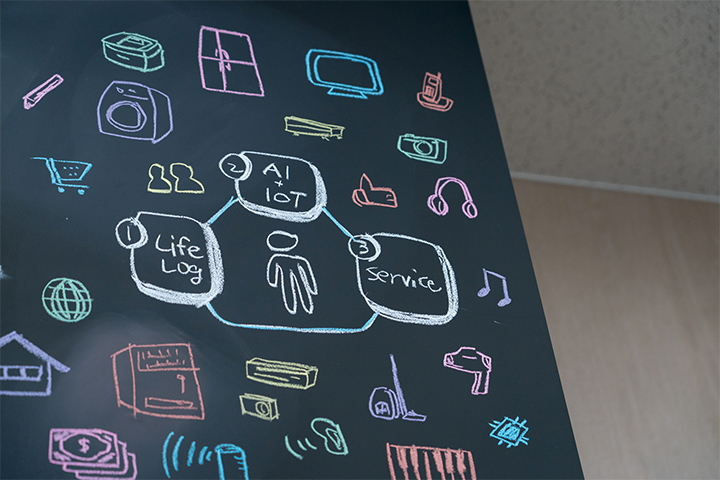 After graduating with a degree from the Kyushu University Faculty of Science's Department of Physics and obtaining a master's degree in condensation science from the Kyushu University Graduate School of Science, he dropped out of the Doctoral Program in Department of Advanced Interdisciplinary Studies at the University of Tokyo's Graduate School of Engineering. After obtaining his master's degree, he began working on management consulting at Nomura Research Institute. In 2013, he became the director of the University of Tokyo's i.school, a global pioneering institute of innovation education, taking responsibility for its overall activity management. Specializing in process design and management techniques for fostering innovation, he is engaged in consulting as well as practical research and educational activities. His recent works include "Innovation Path" (Nikkei Business Publications).

Participated international business management program at Queen's University and worked and trained in Panasonic Canada and US, after joining Panasonic Corp (then Matsushita Electric). Executed marketing communications for audio/video and digital imaging products, including launching of Lumix digital camera and DVD recorder. Appointed as Director in Panasonic Canada in 2010 and managed and executed product and marketing strategy in Consumer Products Division. Led new business development projects for future growth opportunities at Panasonic Appliances Company since 2015. Started internal innovation accelerator Game Changer Catapult in 2016, which is an initiative to transform ideas into reality to make the people's wish through open innovation for a better life, a better world.