BeeEdge Co., Ltd.* is a joint venture between Panasonic, Scrum Ventures, and INCJ, formed with the goal of creating new businesses. BeeEdge recently announced that it has launched GIFMO Co., Ltd. to provide solutions for people who have trouble swallowing, a condition called dysphagia. This new company represents the first business created as a result of GC Catapult's contest to find startup entrepreneurs among Panasonic employees! The business concept originated with a contestant who has family member with a swallowing disorder. She was determined to create a way for everyone in her household to enjoy the same meals together even in old age. A solution was needed that makes food soft and easy to swallow without destroying the appearance and taste of the dish. DeliSofter was the result of her strong determination. (For details)  After being selected as one of the winners of the GC Catapult Business Contest, the DeliSofter concept drew a lot attention when it was exhibited at SXSW 2017 in the United States. It then went through many twists and turns before the business was realized. How did the DeliSofter team overcome challenges during the past two years and eventually reach the launch of GIFMO Co., Ltd.?

As someone also working at Panasonic's Appliances Company, I spoke with two key team members: Tokie Mizuno, who started the DeliSofter project, and Masaru Morizane, the current team leader and CEO of GIFMO Co., Ltd. I asked them how a new business is created at Panasonic and where the challenges lie. I wanted to know about the difficulties of starting up a new business in a large company and their willingness to take on the challenge. This first installment explains how the DeliSofter team found new members after SXSW, and looked for a path toward realizing the business.

* BeeEdge Co., Ltd.: A new company established to foster creation of new businesses; it is jointly funded and managed by three organizations: 1) the Appliances Company, Panasonic's consumer electronics business unit, which seeks to create new businesses, 2) INCJ, Ltd. which aims to create new added value by utilizing open innovation across industries and organizational barriers, and 3) San Francisco based Scrum Ventures, a venture capital company that invests in startups in Japan and the United States. (Official website)

The road after SXSW has been steeper than expected

The DeliSofter business concept originated from the home-based concerns of the two founding team members, Tokie Mizuno and Megumi Ogawa. The contest judges selected DeliSofter based on a business feasibility investigation and gave it high marks in terms of the customer-oriented perspective necessary for success. The team then exhibited at SXSW in March 2017 and received a lot of positive feedback from people there. Next, with support from the business division as well, the DeliSofter team investigated a path toward commercialization. After the initial success at SXSW, it has taken time to set up the business. 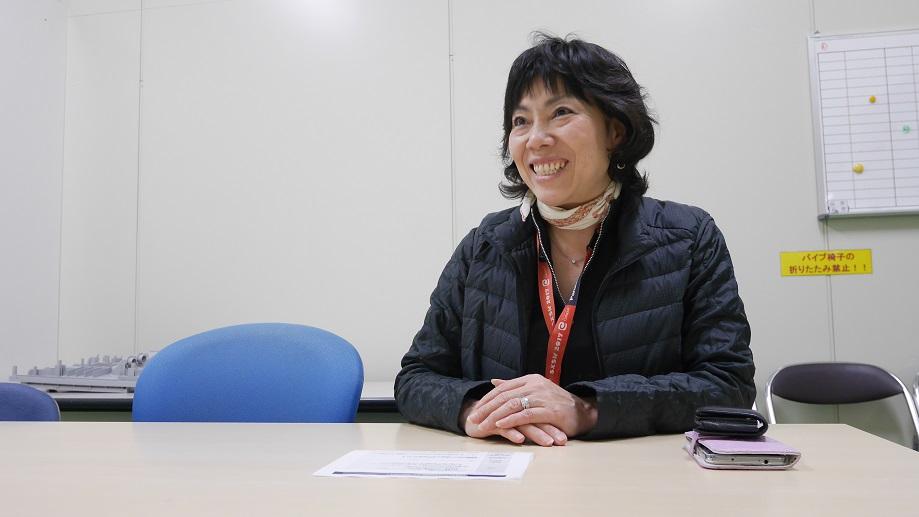 Tokie Mizuno exhibited DeliSofter at SXSW in 2017. I talked with her at the team "headquarters."

Listening to Tokie Mizuno, one of the difficulties of product realization seems to be the challenge of staying loyal to the customer perspective. The DeliSofter team has been striving for market-driven product planning by adhering to a customer perspective based on the founding team members' fervent desire to have this kind of product at home. For this reason, it was necessary to start from scratch in selecting the kinds of technologies that would be combined for product realization. "With the support of a wide range of people, including colleagues from my original workplace," said Mizuno, "we've been learning through a process of trial and error." Mizuno and her team have needed to steadily work through every single issue on their own.

Another challenge lies in the characteristics of a business focused on food that people eat. The DeliSofter team has also been actively attending external events and interviewing people outside the company, while steadily increasing the number of fans of the business concept. The fans have been saying things like, "I want to have one at home!" and "It would be wonderful if I could serve my regular home cooked dishes to my father who now has difficulty swallowing." On the other hand, the greater the range of users, the stricter the safety standards that must be met for product commercialization, and the greater the number of things that must be investigated. With each new idea adopted and issue resolved, new challenges emerged one after another.

Two people were not enough ... A new path was taken by the DeliSofter team using their vulnerability as a springboard

Despite the challenge of speaking in English, the team was filled with a sense of accomplishment after the positive feedback from many visitors at SXSW. However, there were a lot of challenges for business realization, and after a while, the team faced the reality that having only two people had its limitations. The breakthrough came after some words from Masa Fukata, Director of Game Changer Catapult, "Mizuno-san, what can you do with just two people? What should we do? Why don't you find some more team members?"  So Mizuno cautiously started recruiting additional people for her team. "When I first began trying to find new team members," she said, "I had several setbacks, and I never thought I would succeed. However, at my first event planned for recruiting new participants, all the seats were filled. At the end of my presentation I asked who wanted to join us, and some people actually raised their hands. Once my new team was finally assembled, I was quite moved." 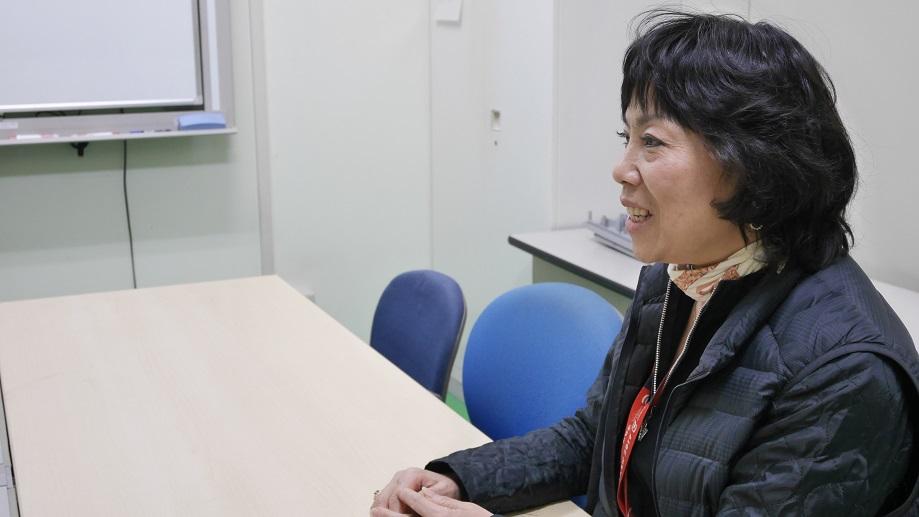 A volunteer project group, Team Ohana, was formed in June 2017 and currently has 19 members. It is working to commercialize various home care appliances in addition to DeliSofter. Though it is a voluntary group, the members are very active. Because many of them work in locations far from the GC Catapult site, they cannot get together often. However, in their online chat group, they constantly share news and information useful for product commercialization. Many group members work in core Panasonic business areas, and their colleagues are also increasingly becoming involved.

"The group is active mainly on weekends," explained Mizuno, "I want to do something for the volunteers who spend their valuable spare time working on our project. So I provide them with lunch, and we enjoy working together. Although not everyone can make it to every meeting, we are proceeding little by little with those who can attend."

Her aim is to continue with what she is good at, while asking questions and teaming up with anyone with abilities. The apparent disadvantage of many members being in distant locations has now been turned into an advantage - the group conducts market research in various locations across Japan. The entire team is working to move the project forward. 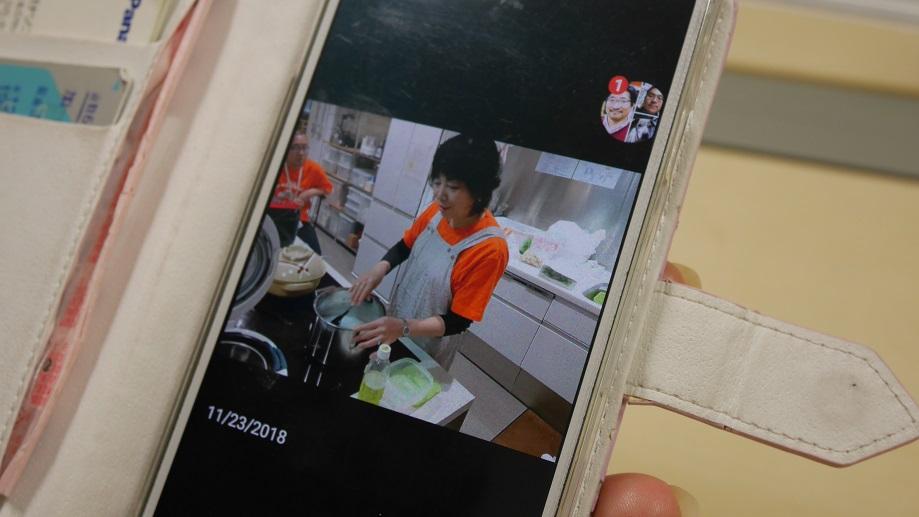 In addition to Mizuno and Ogawa, the founding DeliSofter team members, a recently added member, Masaru Morizane, is now the Team Ohana leader. He is also the CEO of GIFMO Co., Ltd. 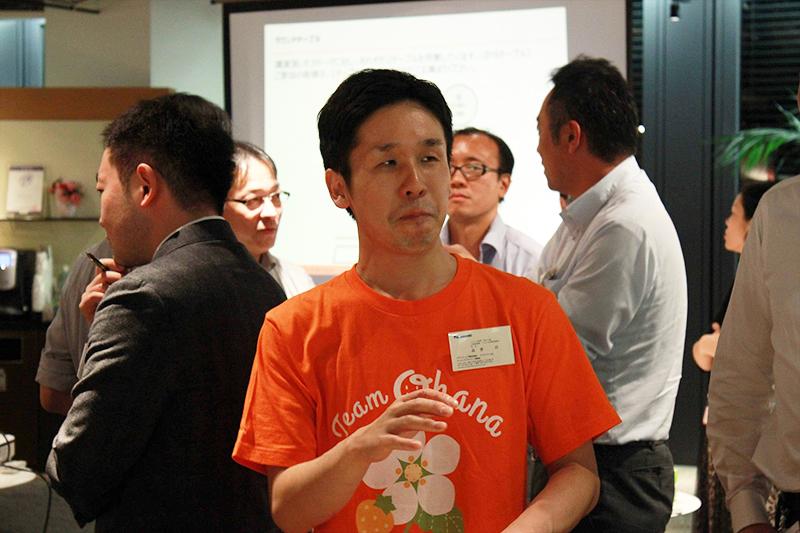 "My original desire was to make home appliances for customers I could recognize," said Morizane. "I joined Panasonic with the idea that I could take on various challenges by utilizing the company's strengths and accumulated technological expertise. While attending an internal event featuring home care appliances, I encountered the DeliSofter aim, which is to continually deliver the joy of eating delicious home-cooked dishes to customers who have difficulty swallowing. I instantly realized that my personal goals aligned exactly with the DeliSofter concept, which was being developed with in-house expertise. That is when I asked to join the DeliSofter team." 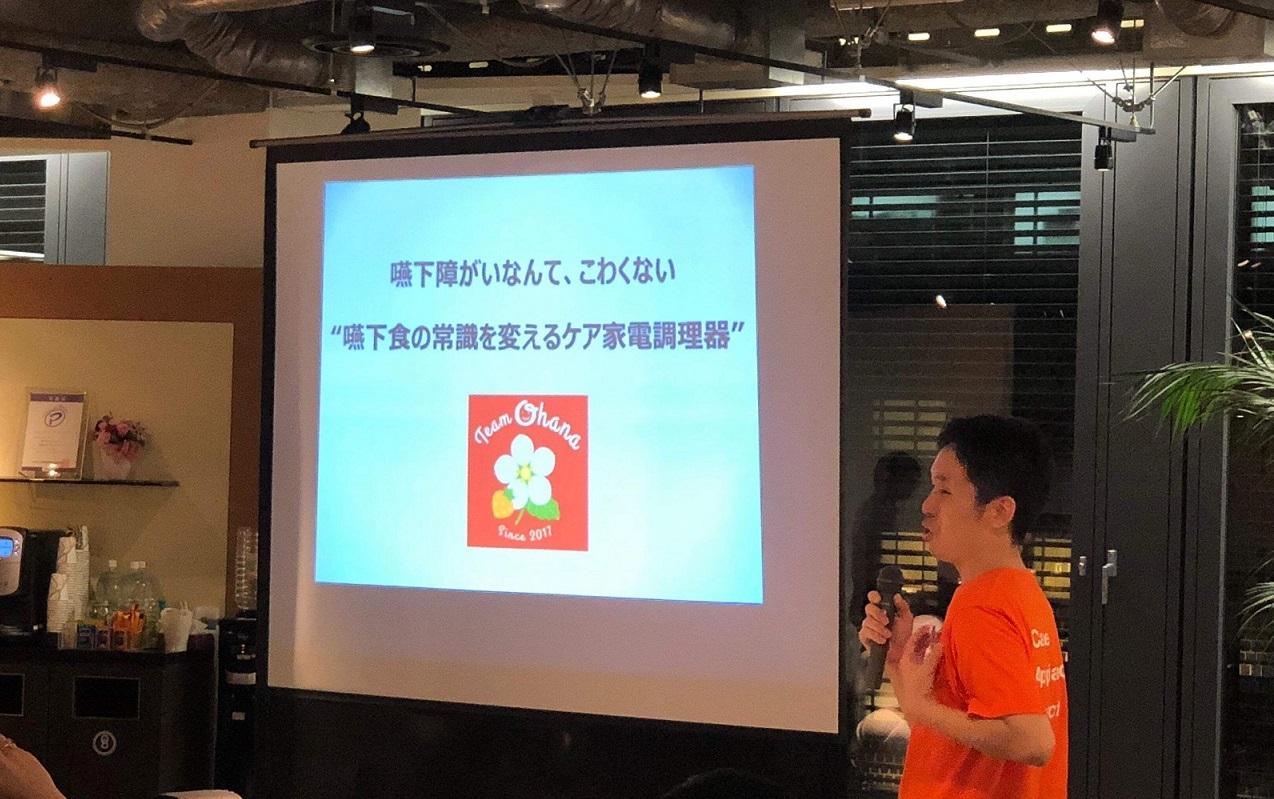 "As Tokie talked, I also feel the power of the team," asserted Morizane. "While we share the same desire to deliver home care appliances to the world, we are also a group of diverse individuals coming together to share our own opinions. We want to bring home care appliances to society, based on relationships that allow us to exchange opinions honestly, as the driving force for the project."

Bringing in product engineers has allowed the team to take charge of prototype design. For example, the first principle model for Stay Mealer, one of the business ideas arising from DeliSofter, was created by the hands of team members. Mizuno explained, "The power of our in-house human resources is really amazing. Panasonic's management philosophy includes the concept of making use of collective wisdom, and now I really feel that power. It is thanks to the team, that I am still passionate about realizing home care appliances." New startup teams have also emerged at Panasonic, by taking on the GC Catapult Business Contest challenge in its 3rd, and now, 4th years.

DeliSofter began with the passion of Mizuno and Ogawa, and Team Ohana steadily grew to include people with a variety of skills and information, as well as other irreplaceable members. Team Ohana is still holding regular meetings and events to gather direct feedback. During the summer vacation, members continued to visit nursing care facilities every day and asked for opinions on the concept. Their goal is to make the most of direct feedback from potential customers for product realization. In February 2019, a DeliSofter tasting event was held at the site of Panasonic. The opportunity for product launch could possibly arise at any time. In addition to product development, the members of the team began learning about marketing to be ready for product launch when it comes. Even with concerns over various hurdles, the team must continue its preparations. In the effort to deliver new products to customers, the necessary activities never cease. A persistent passion for bringing new home care appliances to the world - this is something that hasn't changed since the team began in 2016. Finally, in June, the team found itself on the starting line for product commercialization with the establishment of GIFMO Co., Ltd. Masaru Morizane, a new addition to Team Ohana and its leader, has been appointed as CEO of the new company. The team will strive to achieve its vision of overcoming various challenges to provide food solutions for the elderly.

Impressions of a dedicated startup entrepreneur

The research for this article started with a simple question: What has happened to the people who took up the challenge of launching DeliSofter as a new business? They have experienced the joys and difficulties of working in a large company, and they will continue to face challenges for product realization. Something Tokie Mizuno said during the interview left a lasting impression, "I will never give up, because there are people waiting to enjoy the benefits of this product." Her intense experience and the ideas that emerged from it have not faded and are still the root of all her activities. Perhaps that is why DeliSofter has now reached the business realization stage. Also, her genuine approach to herself and others is impressive. "I cannot do it all by myself, so I ask for help," remarked Mizuno. "I will continue to seek support." I became convinced that her strong convictions and care for customers have been propelling the team toward the realization of a home care appliance business, and this has led to the establishment of GIFMO Co., Ltd.