The Smart Kitchen Summit Japan 2018 was held in Midtown Hibiya, Tokyo on August 8 and 9, 2018. This event describes the future of kitchens, based on the theme of "Food and Cooking x Technology." The Game Changer Catapult was represented by Masa Fukata as well as the totteMEAL team (changing their name from Bento@YourOffice), the Ferment 2.0 team, and the OniRobot team. The teams displayed prototypes and presented their ideas at the venue, as covered in this report.

As the world itself undergoes great changes, the assumptions of business are also being reshaped. The Game Changer Catapult (GCCatapult) seeks to create consumer electronics for the future, to find ways to co-create with many people inside and outside the company, and to search for a new approach for the manufacturing industry. Many of the ideas generated so far for future consumer electronics have to do with food. Seven of these were taken to the South by Southwest (SXSW) conference and festivals for innovation, music, and film held in Austin, Texas (USA) to assess possibilities for commercialization. We explained how a company called BeeEdge was set up jointly with the US venture capital company Scrum Ventures, to progressively develop ideas for commercialization outside the company.

For the GCCatapult, the future of food and kitchens is a highly important theme. As expressed by the words of Yoichi Aso of Alphadrive Co., Ltd., which has been involved in many new projects, to "go to disaster-stricken areas," it is essential for innovation to go to the epicenter of issues. The GCCatapult explained that it sees kitchens as one type of "disaster-stricken area," a front line where innovations will occur. 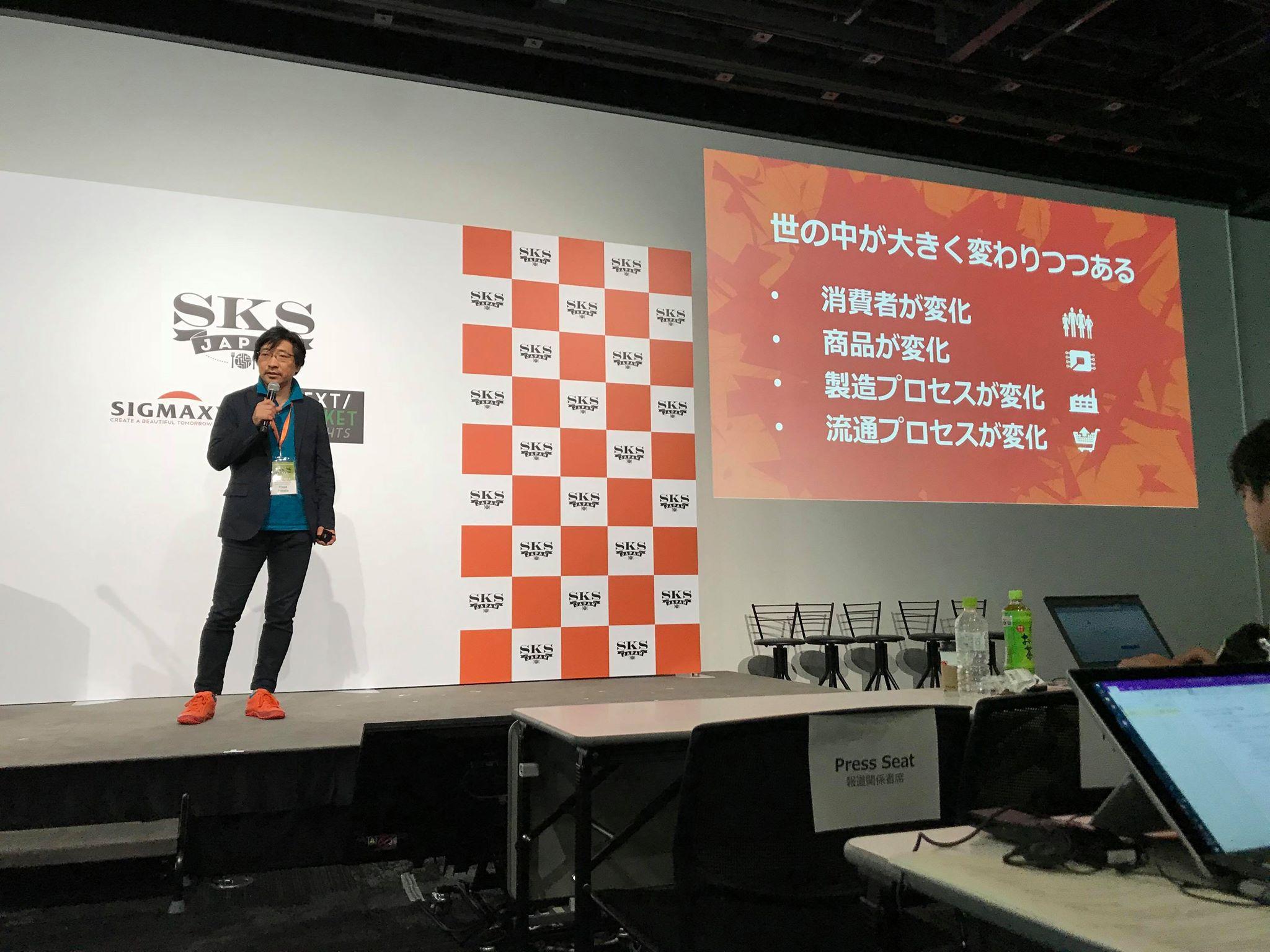 Masa Fukata in charge of the Game Changer Catapult

totteMEAL: an idea to find solutions for "lunch refugees"

We described the totteMEAL unmanned sales platform specializing in health to support businesspeople and food service companies. A special feature of these businesses is that by attaching the customized unit, any box (e.g. refrigerator or suchlike) can become part of the IoT. This is a simple solution allowing cashless sales, inventory management, or analysis of customer preferences.

The totteMEAL app can recommend to users meals with a healthy nutritional balance. We promoted the fact that it provides the value to buyers of ready-made meals of making them think of their health instead of just making a purchase, and for food companies it has the benefit of making it possible to sell products in offices safely and without trouble or requiring a major workforce. 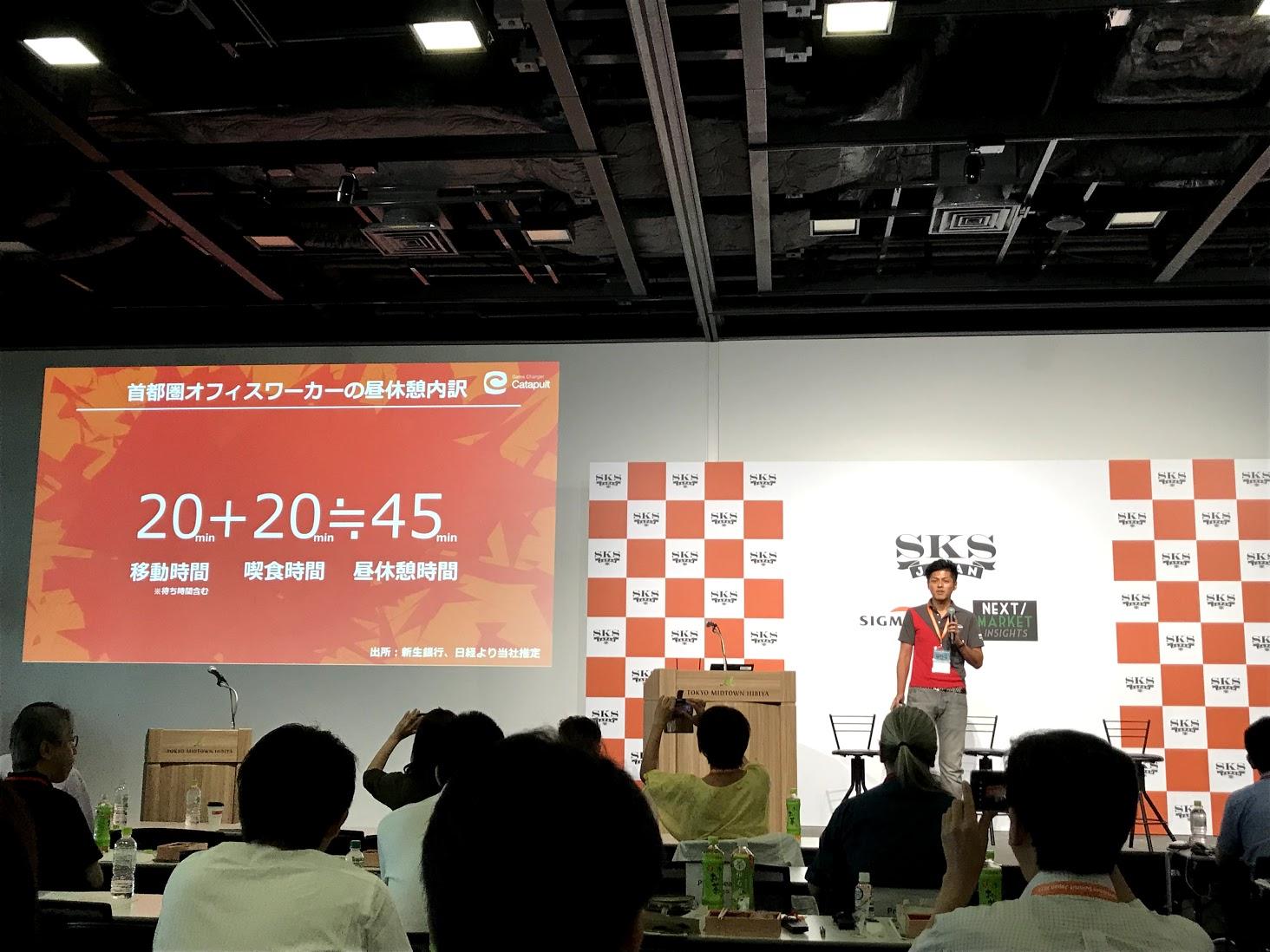 The business idea of Ferment 2.0 got its start at the Smart Kitchen Summit Japan last year. Last year we presented Ferment 1.0 (a fermentation machine and meal kit), and started the project on the spot with involvement from someone from Marukome, a miso maker. Users can monitor the fermentation of their miso at any time using the special stick, while the kit delivers them the soy beans, yeast, and salt. We also put forward an idea for the MISO BALL CLUB community to join people making miso, so they can share their experiences and exchange miso, creating a future where people are linked through food. 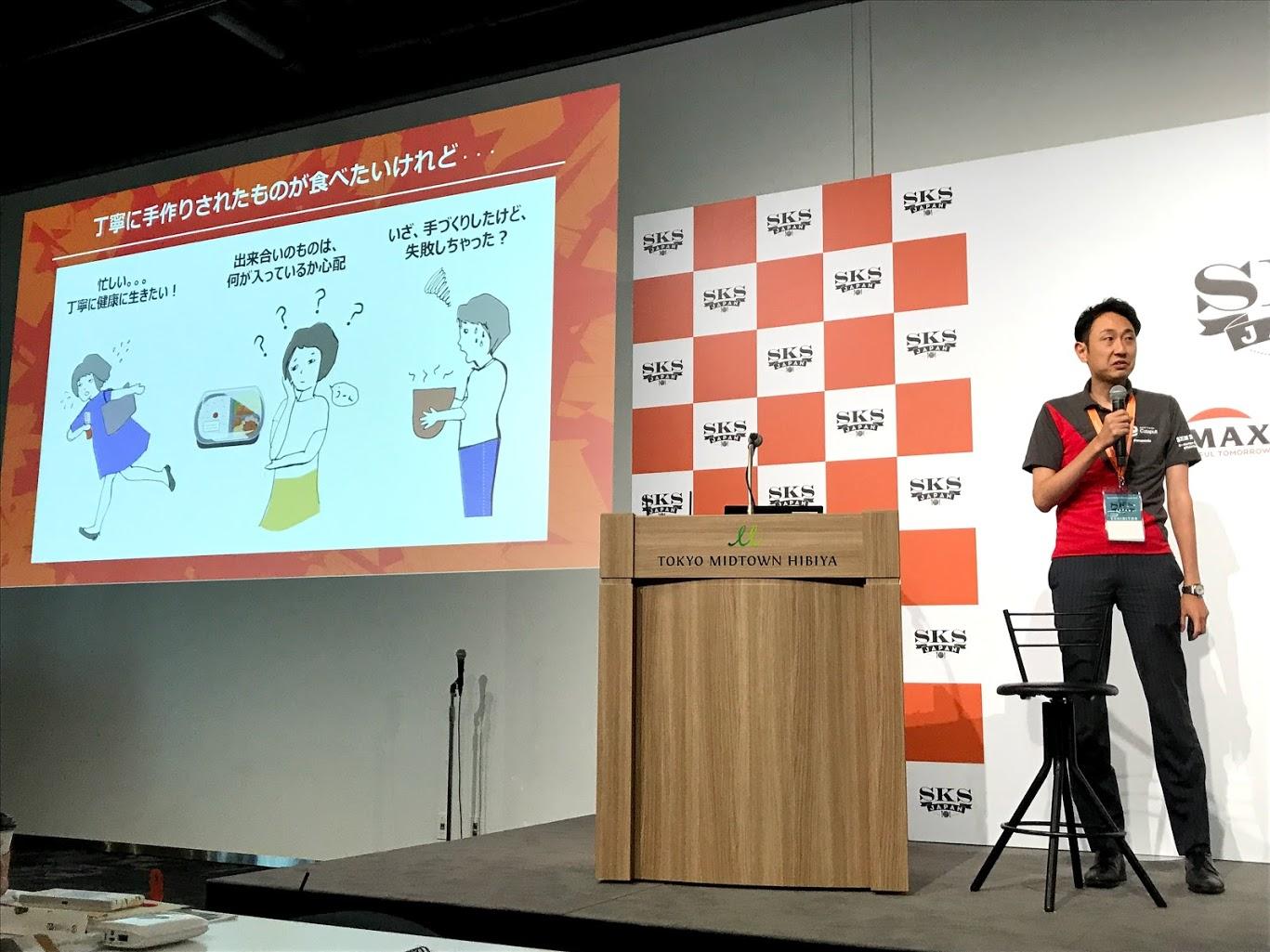 The project "OniRobot" was started under the hope of finding a solution to stop the decline in rice eating in Japan, which will lead to a crisis where Japan's traditional food culture itself is threatened with destruction. Onigiri are made with Japanese rice, salt, and local products in the palm of the hand, combining the whole of Japan's food culture. Rice Ladies have thoroughly studied types of rice throughout Japan and been involved in the development of rice cookers. The results of their studies found three levels of pressure when forming the onigiri, leading to the development of an independent onigiri robot able to make them according to each store's or customer's preferences. We presented our hope to spread Japan's traditional food culture not just in Japan but also to other places which have never tried rice before or don't know about it. 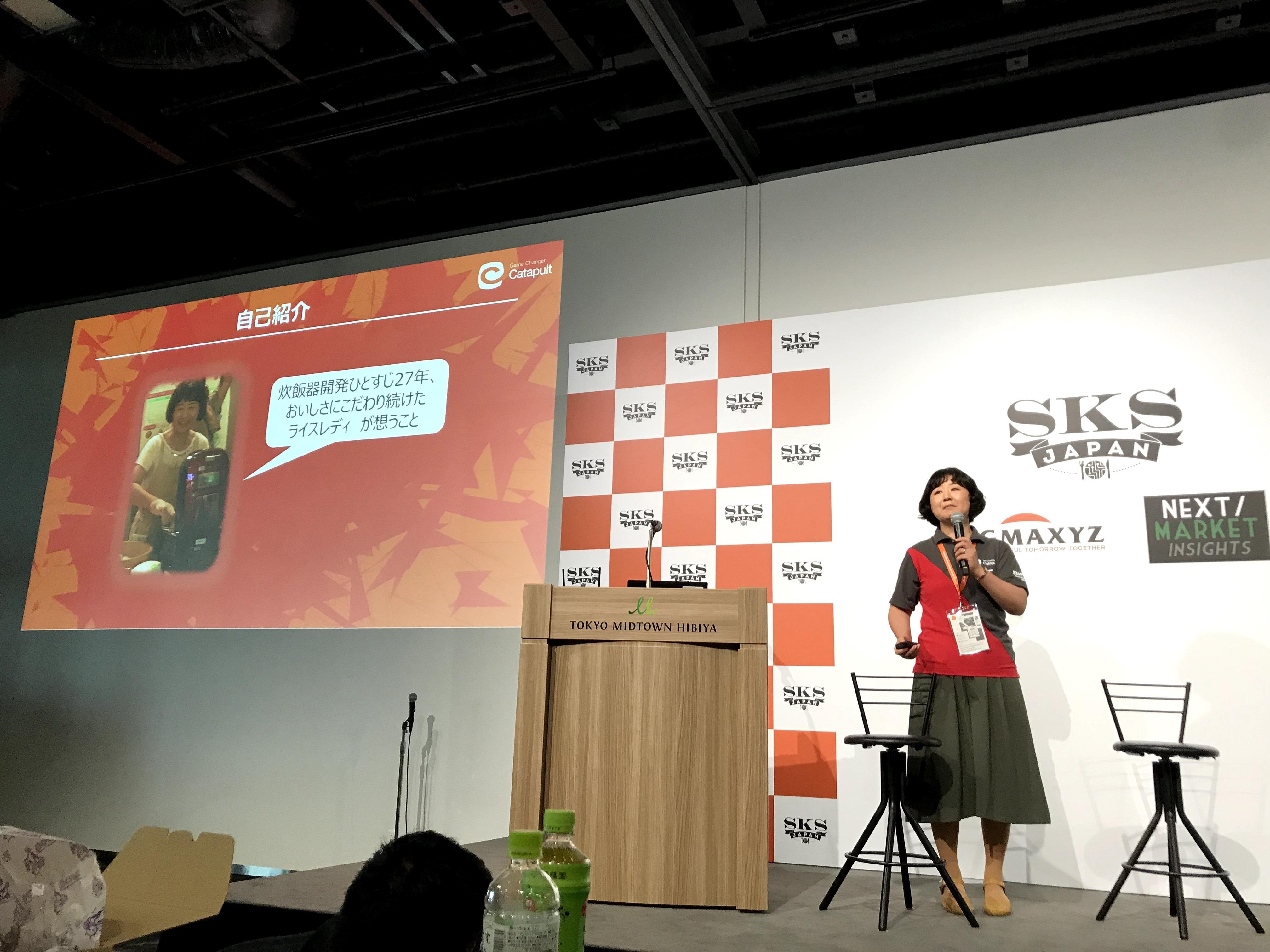 A prototype was shown in the exhibit, becoming the subject of TV news and seen by many people. The GC Catapult will make use of further opportunities like this to bring itself into the public eye. We welcome your support or any opinion you might have! 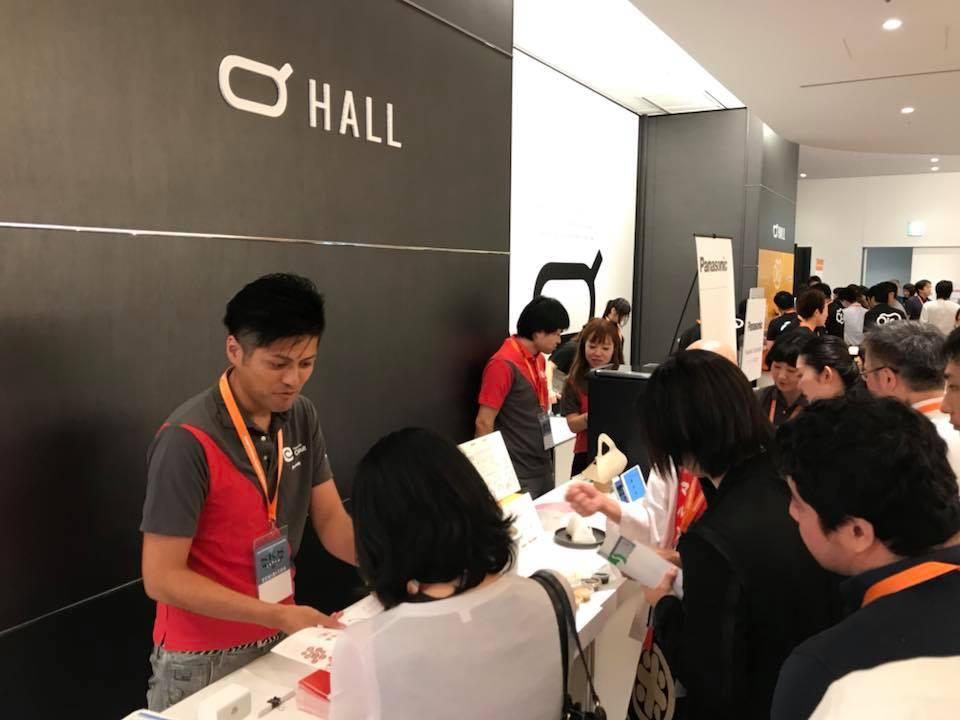