TV has always accompanied family get-togethers. Family members gather around a bright screen and captivating program. People casually watch the TV when it is on. However, Panasonic thought that there could be a "media player as an interior décor" that quietly resides there for people relaxing in a living room. This is how the Ambient Media Player (AMP), a display for living spaces, was born.

AMP was exhibited in SXSW 2017 as a service developed by the Game Changer Catapult. After getting feedback for the prototype in the U.S., it is now moving towards commercialization. It will likely become a medium that adds color to any place including houses and offices. The development team leader Akira Taniguchi develops new themes in the TV business. He stated that he felt the possibilities of "media players as interior décor" as he worked on a number of projects.

Architect Hitoshi Makino is one of the people who felt empathy for the AMP concept. Makino believes that "material wealth has come to its limit". He found in AMP an outlook on "true wealth" within spaces, he said.

Can AMP transform a space to be more comfortable with videos? Taniguchi and Makino are digging deep into this theme.

Value lies in "a space with a TV", rather than in its "function"

Taniguchi: It actually took four years to materialize the AMP product after its initial idea was born. I had been originally working on "new theme development" for TVs, since I first joined Panasonic. When I entered the company, it was the golden days for flat screen TVs. Our focus was how to make thinner TV frames and lighter bodies. We examined the structure of an 8.8mm-thick plasma TV...it was such a time. 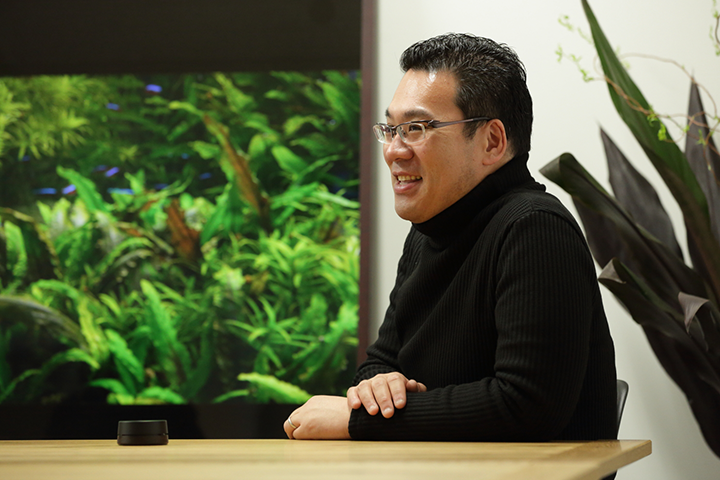 Makino: Today's TVs are really thin and have clear displays. They are indeed a "fruit of technology".

Taniguchi: However, I began to feel that the thickness, skinniness, and weight "had come to the extreme", after such trials and errors. New technologies are only new at the time of release, and someday they will be caught up to by others. The pursuit of better functions itself does not provide new value. We actually need to think "why we are trying to make TVs thinner". We must examine if there will be wealth beyond the thinness.

Makino: Right. To be honest, I always think the easiest way of achieving a wealthy life is by "getting rid of the TV" from a living room. A "wealthy life" changes depending on the times. There were not many things in the past, and hence the development of new technologies meant more convenience. Therefore, more advanced technologies led to greater wealth. I think that consumers also desired "new technologies", and shapes and sizes didn't matter for them. But now, "flat TVs are taken for granted" and consumers don't just desire ones with the latest technology. When standing one step back and seeing from the viewpoint of a "space", functions are too emphasized so that TVs are in a "much-too-thin" level. 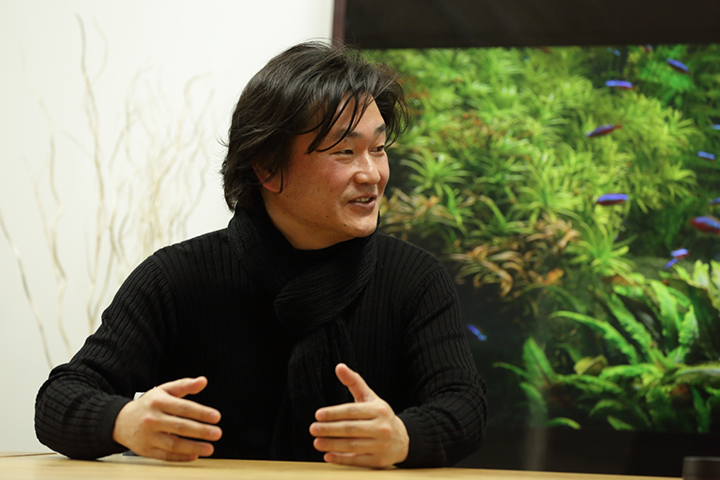 Taniguchi: When "convenience" is pursued while focusing on functions up until a certain level, "comfort" will become limited. Focusing on functionality is necessary for economic activities, yet we need to think about the "just right" spot in the middle, without leaning to one side. 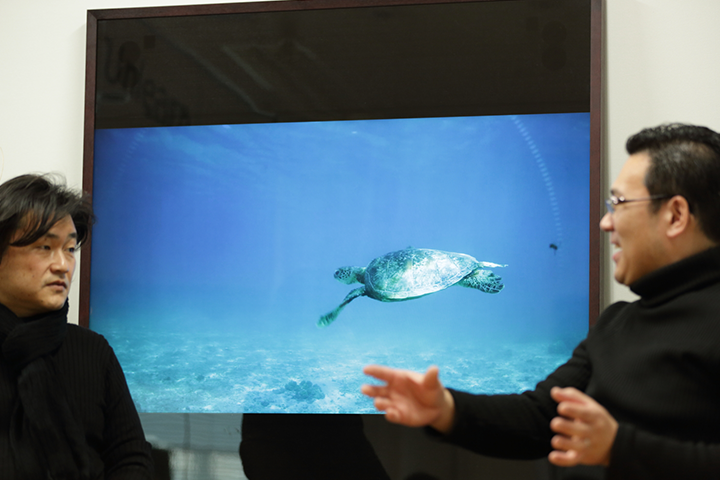 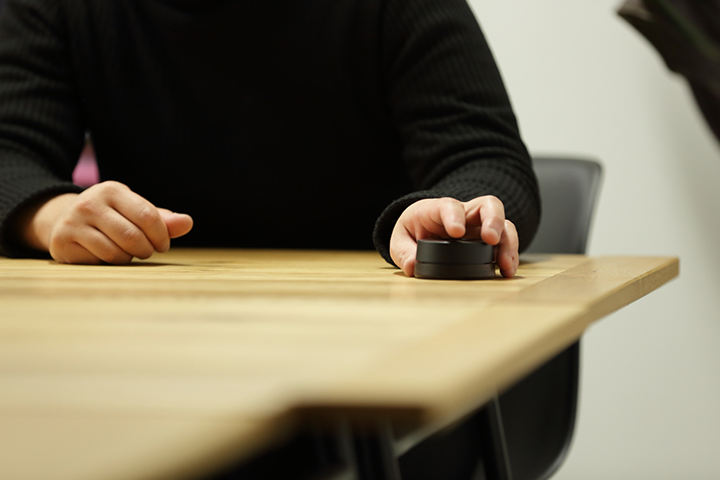 "Just right" in a space is the project concept of AMP

Makino: When I lived in Italy for many years, I had an interesting experience. I went to a house party in the summer, and someone said, "it's hot, let's turn on the AC" and immediately began opening windows (laugh). The air-conditioned space was breezy and unexpectedly comfortable. It's common sense in Japan to close the windows when turning on the AC. But when the AC is on in a room with efficient thermal insulation, sometimes it's uncomfortable due to the lack of breeze even if the temperature is just right. Unintended breezes and noise coming into a space are actually very important. This can be better understood when you imagine a place like a temple.

Taniguchi: One of my colleagues said, "I threw away our TV three years ago, because my wife didn't like it." When a TV is there, people tend to be preoccupied with it and no communication arises even though people are in the same space. When I heard the story, I thought it might be better if the TV does not attract attention. It might be "just right" if it occasionally comes into sight.

We express the "just rightness" in a space with the term "ambient". There is no Japanese word to directly express it. When we brought the prototype to SXSW last year, we explained to the visitors that it was a "picture-like object to decorate a room", or "mood maker". Unlike TVs, AMP only displays audio and visual contents, not "information". When AMP is there, people can somewhat feel the changes in time. It's a passive experience of contents. 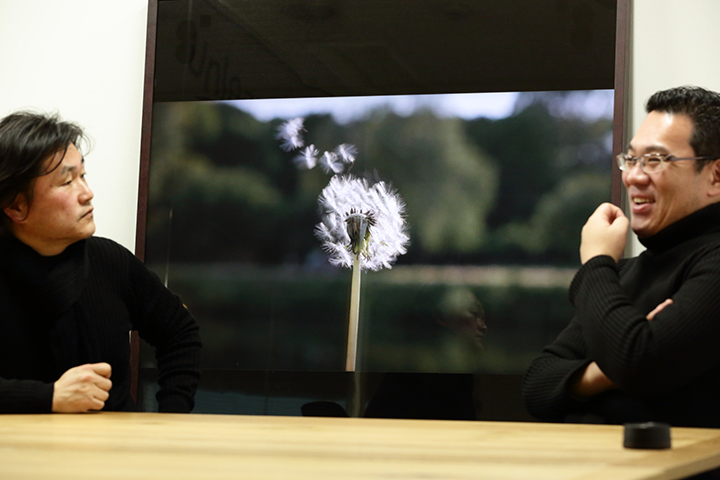 Taniguchi: When products are made solely based on hearing survey information from consumers, they tend to be loaded with various functions. However, consumers desire not only "convenience" but also some sort of "fluctuation" and "inconvenience". I think it is required for manufacturers to conduct product development that can accurately find such hidden insight.

Makino: How did you get in-house approval for AMP?

Taniguchi: Since the concepts of AMP were "ambient" and "comfort", its value was hard to demonstrate in a meeting room. In order to gain support within our company, we persisted in demonstrating the value of experiences. For giving a presentation, we used a space with a sofa, installed the prototype, and even prepared wine. We made things more tangible inch by inch, from information materials to an object, and then from an object to an experience. Then, like in the Game Changer Catapult, people who understood us appeared beyond the boundaries of organizations and departments. I think this results in a departure from the pursuit of functionality, and it becomes a way to realize "products standing on the consumers' side" in a major company. 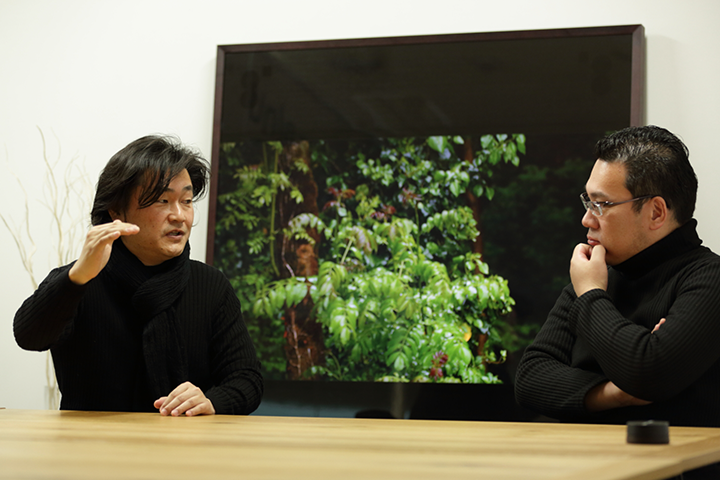 Makino: In my opinion, the decision-making authority and idea drafters should not be separated. The creation of a basis for passionate people in a major company to take responsibility for execution and decision making: this is the aim of the Game Changer Catapult.

Taniguchi: I am a mere mechanical engineer, if I am alone. I can manage to make progress because I am supported by people. Since we are in a major company, I hope there will be many people with a passion to go across the boundaries of organizations. 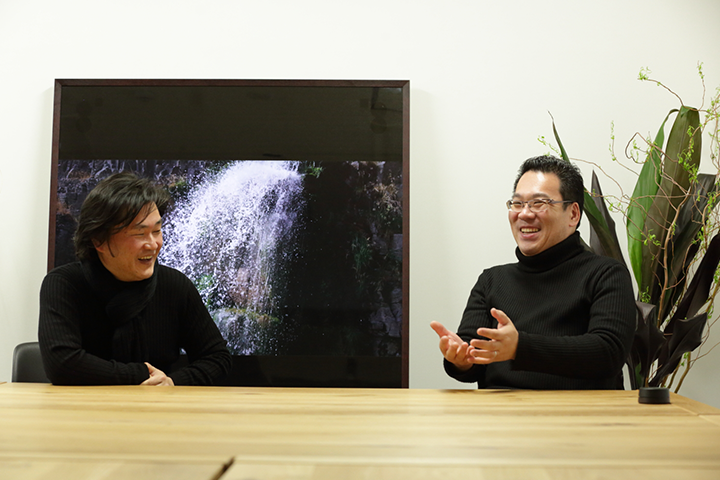 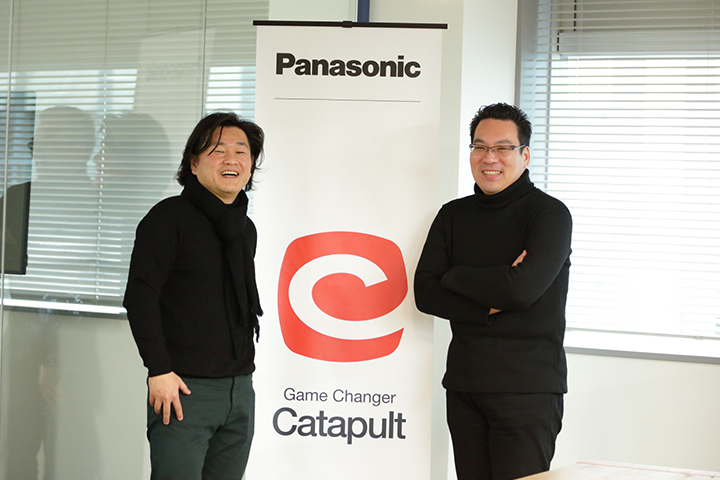