In GCC, the OniRobot project won a booth for the SXSW exhibition. It aims for BtoB business development in North America. Before the SXSW, we invited the Chairman of the Onigiri (rice balls) Society, Yusuke Nakamura, and discussed ideas for "bringing rice balls to the world" with the members of the OniRobot project.

Come-From-Behind Victory Starting from a Backup: the game changed when the target shifted from domestic to overseas market 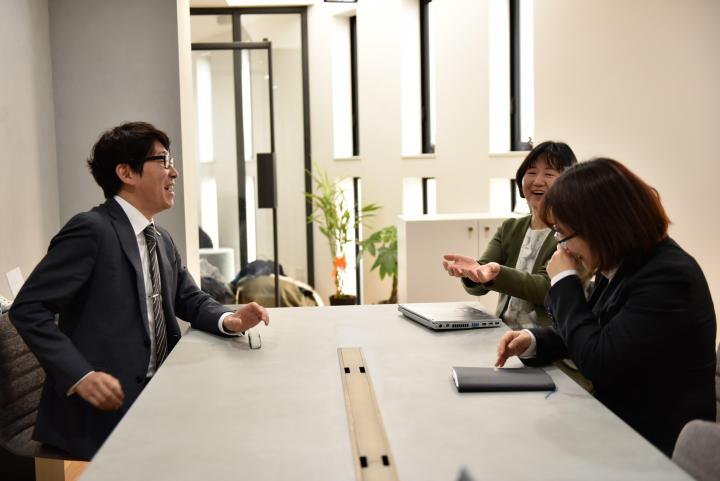 Yusuke Nakamura： I believe that I met you when we were both judges of the sensory evaluation for the "Yumepirika rice contest" in Hokkaido.

Saori Kako： Right! At that time, seven teams were left as finalists in GCC. We were in the 7th position - a backup.

Nakamura： How did you reverse the situation?

Kako： I was originally developing rice cookers, with an emphasis on transmitting the appeal of white rice to Japanese people. However, we had limited resources and budget since we were a backup, so we focused on "OniRobot" that had already been developed but never attracted attention.

We will popularize rice balls as Japanese culture and raise fans in North America, where health awareness is high and Japanese food is popular. If a rice ball boom occurs there, it would be re-imported to Japan and consumption in Japan may grow. When we changed our plan to "transmitting rice balls overseas", our plan was viewed favorably by the judges. 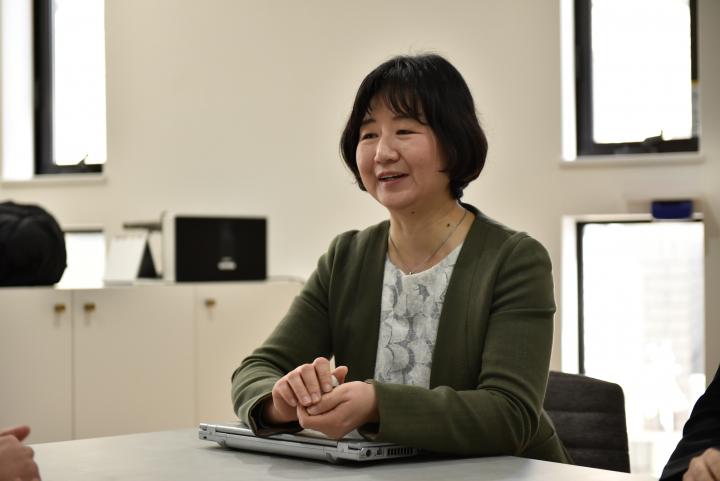 Nakamura： I see. How is OniRobot different from conventional rice ball making machines?

Kako： OniRobot was developed with a concept to "recreate the hand movements of good cooks when they make rice balls". Analysis of the manual rice ball making process revealed the complexity of the movements, which requires many operation axes (motors) when mechanized. The first challenge was to reduce the number of motors to one, in order to create a simple design.

The next step was acquiring know-how for shaping. Rice grains are crushed when squeezed too hard, and rice balls fall apart upon being held when squeezed too loosely. We completed a rice ball sequence to achieve an ideal hardness with the proper amount of air, after repeated trial and error with various conditions, such as how many times the rice should be squeezed, how much load should be applied, and how long the load should be retained. When taking CT scan images, the cross sections actually had this many differences. 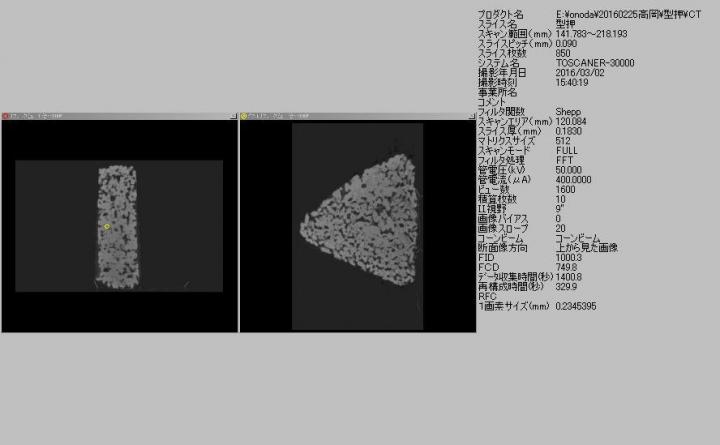 Shop selling Onigiri what doesn't include enough air inside. 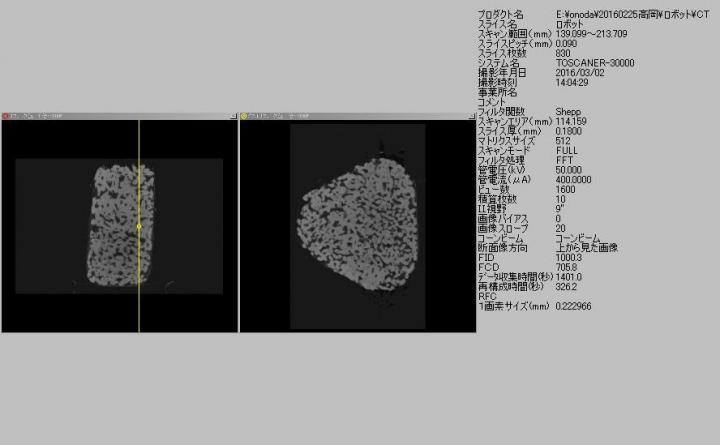 The one cooked by "Onirobot" that achieve an ideal hardness with the proper amount of air.

Kako: Overall, by combining the OniRobot and an ordering system using IoT, we propose franchise rice ball shops, where professional-made-quality delicious rice balls are served with simple and minimal facilities investments and labor costs. We believe that we can provide customers in North America with new value of a healthy fast food, as an alternative to hamburgers and hot dogs.

Aiming for Resurgence of "Rice Culture" by Re-importing from Overseas

Kako： How do you actually introduce rice balls overseas?

Nakamura： Many people call them "sushi" on first sight. Then I explain "these are Japanese rice balls called 'onigiri'. They already existed in the Yayoi period and are much older than sushi, which appeared in the Edo period". I also explain that the rice balls have some filling, since they have no topping like sushi. However, when young people and Japanese anime freaks see rice balls, they say, "I've seen these in Pokémon," or "I've seen these in K-On!".

Gao： There are definitely many overseas populations who came to know the rice balls by watching Japanese anime or playing games. Some people say they needed to look them up online to find out what they were. 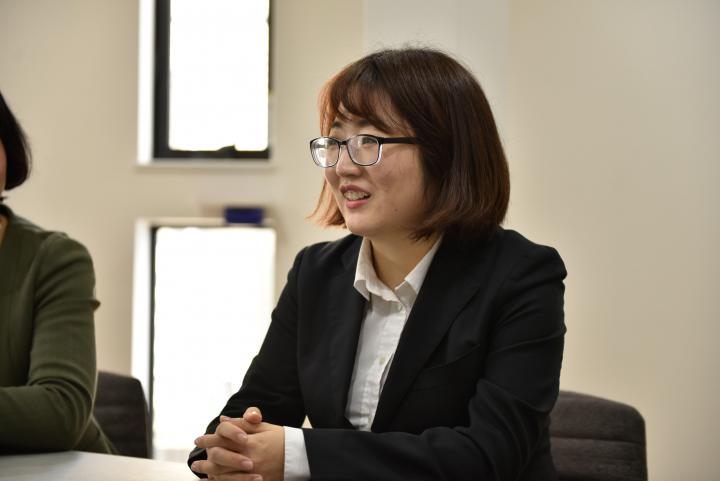 Nakamura： Right. Some say, "there is Origiri as a Final Fantasy item, but why do they increase hit points?" But I think it is one way of being interested. Another thing is that some insist that the triangular shape of the rice balls resembles Mt. Fuji.

Kako： Wow, is that right?

Nakamura：In one of the mountain worship groups, called the Fujiko confraternity, believers gave money and wishes to healthy youngsters and asked them to climb Mt. Fuji. People who didn't climb ate rice balls, shaped like Mt. Fuji, to share the experience of climbing Mt. Fuji. Foreigners know "fujiyama", "ninja", and "samurai" for sure. So if you are dressed in a ninja costume and distribute rice balls, then your SXSW booth would attract many people.

I wish OniRobot will be a trigger for the global population to eat rice balls. Rice balls can be substituted for sandwiches. I think women, being more conscious about their body shape, would eat rice balls as they are much lower in calories. 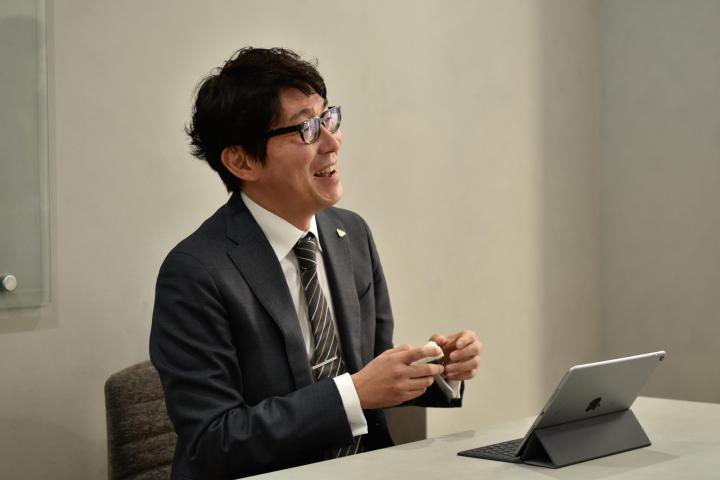 Kako： I think rice is one of the world's rare staple foods that only needs water to cook, providing soft and delicious food. I truly want as many people as possible to know this deliciousness.

Nakamura： Right. What concerns me is the stagnated price of rice due to the decrease in consumption, regardless of the tender care of rice farmers. I wish they would have a proper income that is commensurate to their value. Japanese people overlook the precious value of rice and water, as people tend to think they are almost free. I expect this type of effort by Panasonic will bring good consequences.

Gao： I feel a little nervous but I want to enjoy it.

Kako： Let's do our best! 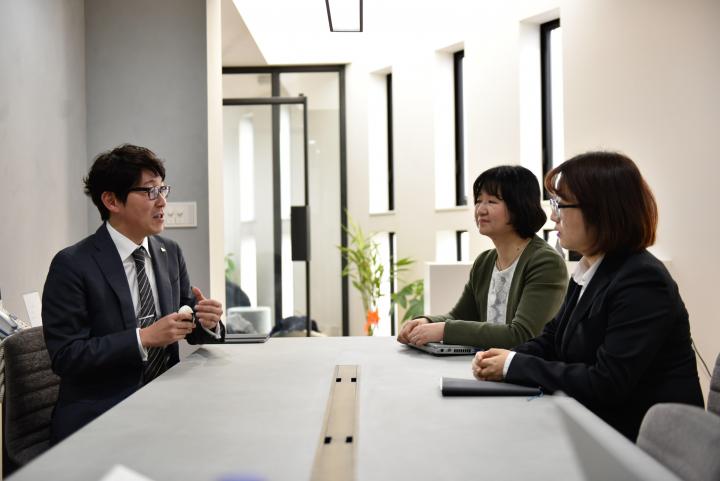 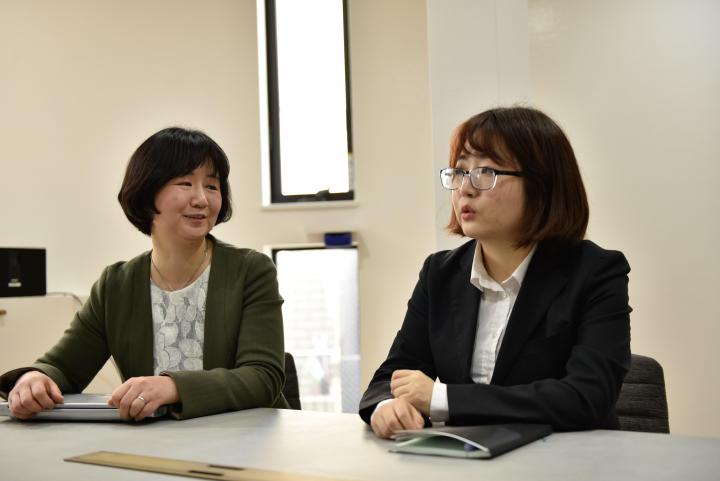 Established Onigiri Society for spreading Onigiri as Japanese soul food after having developed a career as editor-writer and columnist.And also invited to Milan Expo 2015 .In addition to being a chairman of Onigiri Society, also CEO of N-plus Inc. which is digital marketing company.

Kako has been working on cooking software development (mainly IH rice cookers) for 25 years, ever since entering the company. Her nickname is "Rice Lady". She is currently in charge of technology planning of rice cookers, and is also exploring delicious Japanese rice. She also works on proposals for future rice cookers.

Born in Hebei province, China. After gaining her master's degree in Japan, she entered Panasonic. Her major is electrical and electronics engineering and is currently in charge of control design of rice cookers for the overseas market. Creation of home electronics that will surprise the global population is her dream.