What is the Sake Cooler? 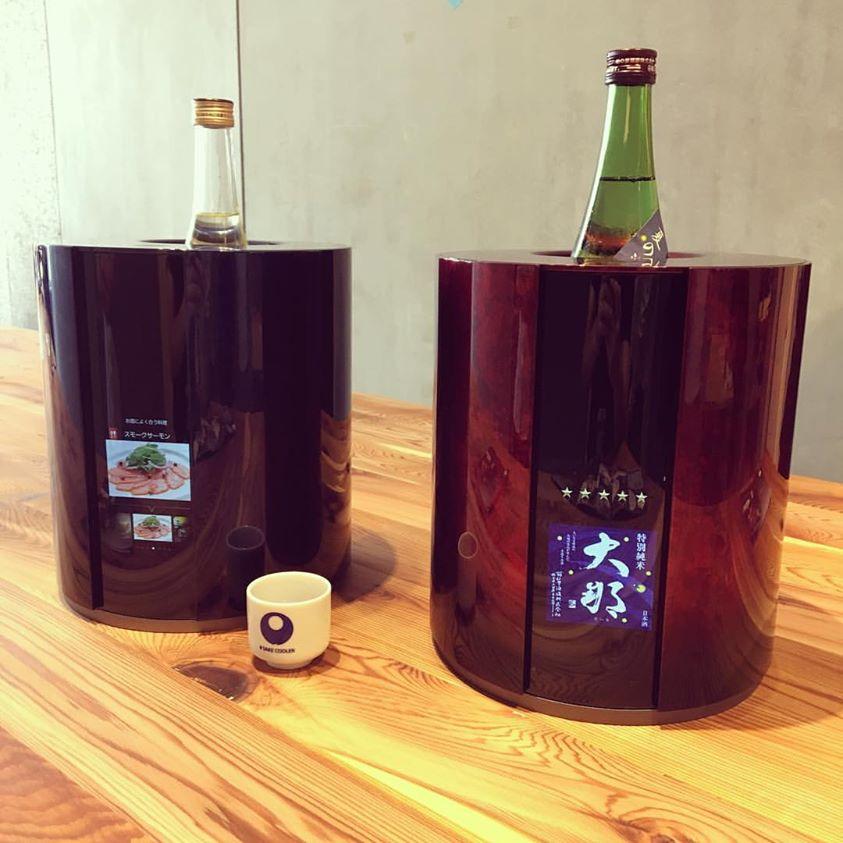 The Sake Cooler (link to the product page) is one of the themes of the first term of the Game Changer Catapult initiative to accelerate the creation of new Panasonic businesses. The aim of this project is to provide a solution that supports the development of Japanese sake culture appreciation outside Japan. It was first exhibited in Texas at SXSW in March 2017. The Sake Cooler is not simply a tabletop sake chiller, but a tool that connects brewers and people, and makes sake more enjoyable. In addition to the basic function of chilling Japanese sake, inserting the bottle activates the internal camera which recognizes the label, then displays information about the brewer and food that goes well with the sake on the front display panel.

Despite the rising popularity of Japanese food and sake outside of Japan, even Japanese people have difficulty explaining sake. As a Japanese sake enthusiast, I have felt the frustration of not being able to convey its brilliance eloquently. We, the Sake Cooler team members, talked endlessly on how we could spread the word on the virtues of Japanese sake, wondering if people would feel more affinity for it if they could see the smiles of the brewers, etc. We created sketches, and built a prototype that we brought to SXSW. At this event, we wanted to ask visitors from around the world what they thought of such a product and what we could do to improve it.

My first SXSW was overwhelming! What I felt at SXSW...

SXSW originates as a music and cultural festival, but has begun to attract startups and investors in recent years. Up to now, my experience at consumer electronics trade fairs has consisted of mingling with manufacturers. Visitors at SXSW however, were completely different! This was a big surprise for me. Visitors included Austin residents, buyers, media, celebrity chefs, and others who you would never expect to show at such an event, one after the other. They viewed demos and shared a variety of ideas and opinions. "Can I buy this in New York?" "I had no idea that cheese pairs well with Japanese sake!" "Amazing!" Locals offered a stream of straightforward feedback and reactions which quickly filled my memo pad. One morning at a meeting we were amazed to hear that someone called the Panasonic call center in Japan looking to purchase a Sake Cooler immediately. This experience showed us that the effects of SXSW are not limited to the United States alone, but link to the world. After these hectic four days I was tired, but the expectations and words of support from visitors made a great souvenir to bring back home.

I returned from the elation of SXSW to everyday work. Actually, most members of the Sake Cooler team are working at different departments and squeeze out just enough time to come up with ideas for new businesses. Those of us on the Sake Cooler project were permitted to carry on with the project activities after SXSW on condition that we continue working at our regular jobs in parallel. With the backing of our departments, we managed to set aside some time to get together with the team members to make improvements on the prototype based on ideas gathered at SXSW. Discussions and development work with the members who share a passion to create new value made for a truly rewarding experience. Thankfully we were able to secure the minimum budget to proceed with the project. We used it to make gradual modifications, showing it to persons in the sake industry in Japan, incorporating their feedback into further improvements.

What's important here is to create a product and service that pleases those involved with Japanese sake. We talked to experts in Japan and overseas to seek the ideal final product and continued making many modifications. A turning point for us was meeting Toshie Hiraide, who is working to spread the sake culture across the globe through activities, such as giving lectures aimed at making Japan a tourist destination by promoting sake. In support of the Sake Cooler concept, she became our advisor and helped us set the goal of developing a standard for promoting information about sake in multiple languages and creating a platform through which even small brewers can promote the excellence of Japanese sake around the globe.

Fleshing out an incomplete hypothesis through on-site experience - Experiment at Roki, an izakaya restaurant in New York

Manufacturing is a mysterious thing. Despite knowing that the odds of your first hypothesis being correct are low, it becomes difficult to change once it has a physical form and you become attached to it. Truth be told, the Sake Cooler team began showing this tendency, making it necessary to seek feedback from people in the field in order to boldly reinvent our product. As a way to experiment with our initial Sake Cooler target market of overseas restaurants, we obtained the cooperation of chef Koji Hagihara at New York izakaya Roki to push through a three-day experiment at the restaurant in December.