Whitening teeth with air and water instead of gel

The pursuit of beauty involves perseverance and patience. This applies especially to the whitening of teeth. Up to now, "no pain, no gain" was the only way available. According to surveys by Panasonic, 23.4%1 of people experience dentin hypersensitivity during or after whitening treatment. The degree of this depends on the type of whitening gel and the person's own teeth, but in severe cases, people experience extreme dentin hypersensitivity just from drinking water. Many people are unable to continue with the whitening treatment, despite their desire for whiter teeth. Sylphid was created to solve this problem by overturning conventional approaches.

The name "Sylphid" comes from the term for a spirit of the air. Just as the name implies, it whitens teeth with air and water instead of gel. 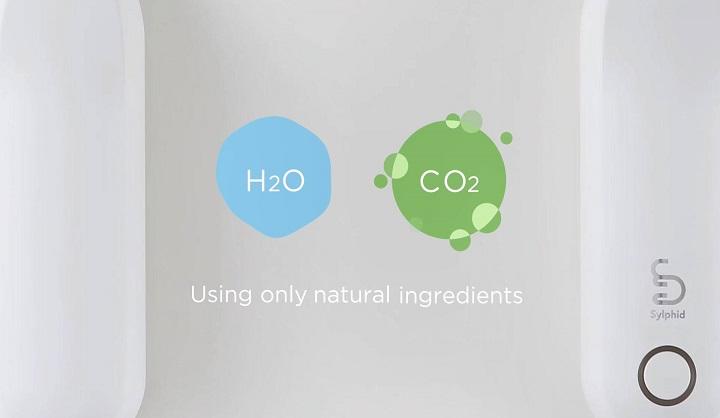 The inspiration for this project

This project had its beginnings five years ago.

A study of whitening technology showed the long history so far. The ancient Egyptians were the first to try out ways to whiten their teeth. Modern-day methods use gel containing hydrogen peroxide. But this method has remained unchanged for decades.

Devices are in use now to care for our hair and skin - why not whitening as well? At this point, I was unsure of what merits there might be in finding a method that didn't use gel, but I figured that such a product would definitely have a new value. I was in charge of the whitening project, so I excitedly decided to create a product completely unlike anything used before.

Once I'd decided to try to make whitening possible without gel, I started to think how to do this. I found out that hydrogen peroxide was used because it produced the active ingredient of hydroxyl radicals that whitened the teeth. The hydrogen peroxide-containing gel is the main cause of the dentin hypersensitivity that occurs during and after whitening treatment. I made a comprehensive investigation of how to generate hydroxyl radicals without using the gel, which finally led me to the functional mist technology. I tried out some tests using a plasma device and found that the bovine teeth2 that I was using for evaluation rapidly whitened. I felt like I was the first person in the world to have done this, so I was very happy.

The road up to the present concept

While I was working on the whitening project, I decided one day that I should try it out myself, at my own expense. I had a slight complex over the discoloration of some of my teeth, but I had never considered whitening before, so at first it was just part of my job. But once I tried it out, I found it very impressive. I really felt for myself just how much of a change white teeth made to the impression of my appearance and how I felt about myself. I realized that whitening was a way to find a new me and to open up the world. Even though I hadn't told anyone else about what I was doing, people still complimented me for my white teeth, which gradually gave me confidence. I wondered why I hadn't tried it earlier, and definitely wanted other people to experience just how great a change having white teeth could be.

Yet on asking people I knew, I found only one person who had done whitening. Even though they were all concerned about the color of their teeth and were interested in trying whitening, only one person had actually gone ahead and done it. I realized while listening to them that there are unconscious barriers against whitening. People automatically assume it must be expensive or painful, or that only people really conscious of their teeth would do it. And, of course, some people don't like going to the dentist. I decided that I must find a solution to these barriers so that more people could experience a new side of themselves through whitening their teeth.

I started to think that providing a whitening tool for home use would make it more familiar, and that we needed a way to provide whitening without the pain. I saw the possibilities of achieving this by not using hydrogen peroxide-based gel, so I committed myself to the concept of pain-free whitening without gel.

Once I'd hit upon Panasonic's own plasma technology, progress seemed to go well, but then I came up against a wall. Bovine teeth are used for testing products like these before trying them out on people. But even though they worked on bovine teeth, they completely failed to work on human teeth. I went back to testing on bovine teeth and changed some conditions to lift the results, but this time, I hit problems with safety for use on human teeth. Day after day, I failed to get the results I needed and began to wonder whether I should quit.

I finally found the clue out of this situation at a lecture held outside the company. That clue enabled me to take a step forward to achieving an effective yet safe method. In the end, it took around two years to make this work.

Though I'd worked through difficulties over three years of development to reach the point where I could see the light at the end of the tunnel, the need for various applications and investment caused the project to come to a halt. I couldn't see where to go from this point; I was at rock-bottom. 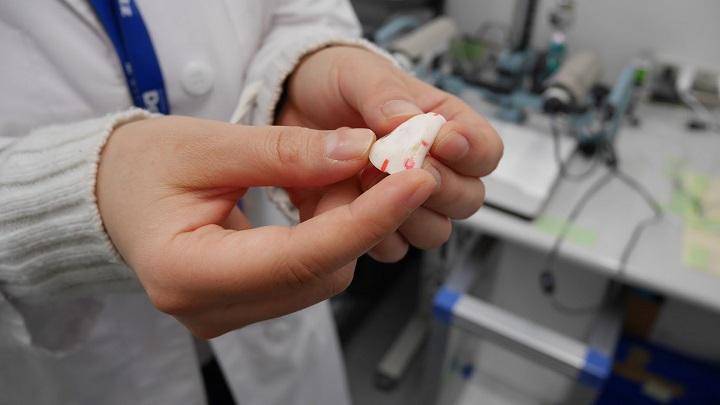 Tooth of cow for experiment 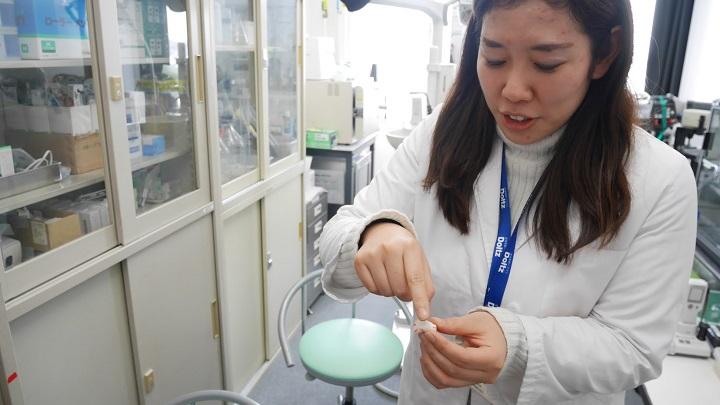 "I can't give up until I talk with actual users"

Giving up this project after five years... Faced with the pressure of thinking whether to quit or not, I decided I wouldn't give up until I talked with actual users.

So I went to the USA, which seemed like the best place, to do the interviews. This was my first chance to see the candid reactions of users. The looks on the faces of the people being interviewed changed the moment they saw the concept of the Sylphid. "Where can I buy this?," "This will be a serious innovation when it's released as a product," "This overturns the idea of 'no pain, no gain'": all these comments made me sure that I was on the right track.

I achieved this by looking the dissatisfaction of users with the same old whitening gel that had been around for decades, for so long that no one even considered an alternative. Seeing the reactions of the people in the interviews made me certain that I was on the right track. So, I set out to find some way to keep the project going. That's when I find the business competition of Game Changer Catapult.

The teeth of cows are similar to those of humans, which is why they are used for dental testing before trials on humans.

Gel containing hydrogen peroxide and urea peroxide is used in the current standard method of whitening. The hydrogen peroxide is thought to be one cause of dentin hypersensitivity. The reason why people cannot continue with whitening is not limited to the pain alone. When doing whitening at home, the user has to first try to get the right amount of gel applied to the mouthpiece, then after the treatment, they have to wash the sticky gel out of the mouthpiece with a toothbrush. This process makes many people give up on whitening.